Boys will be boys and boys will be girls, it’s a mixed up messed up shook up world except for Lola…

It’s one of my favourite songs, partly because of the gender bendering that goes on it.  When I was twenty and first met my future husband, I kinda identified as the super-confident Lola, with him being the virginal little blossom that sings the song.  You know the line, ‘she picked me up and sat me on her knee, and said little boy will you come home with me..”  Well that was us.  Sort of.

He (the husband) was round-faced and short and a bit shy and I was a sex-crazed predator in the body of an aloof, socially awkward young uni student.  I’ve always had a thing for men who arouse the more masculine side of my femininity.  Sometimes I shock my daughter by referring to some new squeeze as ‘a cute little thing’.  I know, we’re supposed to like men who are tall and protective and superior – but it takes a lot of man to be superior to me, so in the meantime I’ll settle for a sweet smile and an obedient disposition.

Anyway, when Bex Wild asked me to review her bisexual transgender thriller-romance, Mansworld, I thought, now is my chance to seriously check out love from a different angle.  I’m as straight as a hypotenuse myself, but pretty soon I realised that this was a tale of men mesmerised by other men’s rear ends and a beautiful woman who’s deeply, confusedly masculine.  The chat is flirty and gay, the setting very London-scene, but the love – seems to me to be much like love everywhere.

Unlike men, who to almost a man love watching lesbian women get off with each other, women are supposed to be disgusted by gay erotica.  Still I have to admit that sitting there reading this stuff, I found myself getting the hots – so if you’re looking for something to warm the cockles of your, um, on a cold winter night, you might want to run off to Amazon and add it to your collection.  Add the mafia angle, and you have a light, fluffy, but quite interesting read.

Anyway, Bex offered to do a guest interview on my blog in return for the one-day course in diverse romance, and here it is!

Me: So, you’ve written a gay romance/mafia thriller.  Is gay romance different from straight romance, do you think?

Bex: For me, regards writing this book, not really. There are obstacles to overcome within any relationship as well as highs to be enjoyed, and I guess some will be less or more, depending on the lifestyles the individual lovers lead. When it comes to two people developing feelings for each other, I think its not so much about whether they are the same sex or not, but just about the particular people they are. I don’t believe all men are one way, and all women a certain other way, which therefore dictates the path of romance, it’s just the chemistry of the particular mix in question. I feel its more how we each perceive and deal with situations that arise around our relationships can change all the written ‘rules’, so to speak. The different romantic elements of this book, I feel have  a lot to do with the pressures that invariably get placed on relationships, which can be the make or break them, and are there to be worked through in romances of all sexual orientation

Me: When you wrote this story, was your main aim to entertain people – or does it have a ‘message’?
Bex: It was definitely written specifically to entertain, as I wrote it for my mother to read and hopefully enjoy.
That’s how it started in fact, just by handing her the prologue, with the emphasis on the characters more than plot at that point, and basically saying ‘would you like to read a story about these people?’ Obviously she did, and the book just took shape from there, as I delivered, page by page as she read, what I hoped was as entertaining for her to read as it was for me to write. If readers can gain their own understanding of any messages weaved into it along their way, I guess in a way that depends on the individual reader. I like walking the blurred lines between stereotypes, I grew up in the late eighties/early nineties in East London, knew those kind of characters both personally and through stories and my mother had been a big part of that whole culture for me, and so I wanted to create a mix that was both personal for us and out there on it’s own as something I had written. The intention, was for it to be light and frothy, composed, but still to hold you until the end.
Me: The book’s partly about transgender issues – particularly, about a woman who feels like a man, taking up with a man who’s bi (or gay?).  Is that from personal experience? (ie yours or people you know)  What DOES it feel like to be a sexually mannish woman?
Bex: Yes, it was. It was a leaning my mother and I shared and as I said it was written for her, it was as well as a lot of aspects of the book, included for her benefit, as a major part of our characters that we had in common. Having that kind of aspect to your personality, I think only adds to your perspective of your life and that which transpires around you, the larger your scope the more you see and feel. It has held its negative elements of confusion and that feeling of a square peg in a round hole, but I’ve always believed it’s not about changing your shape but just having to perhaps look a little harder to find the right shaped hole to suit you. It was something I wanted to explore in a character, but I also wanted to do it with an air of ambiguity and not just lay it out right there on the table, I wanted some of that character to be complex and concealed to the reader to work out and to what levels, just as much as she is to herself in that point of her life.

Me: What’s your personal reason for writing?
Bex: Just for the pure love of creating a story and most of all the pure love of creating characters. It has always been about characters for me, I love to see them grow, adapt, surprise, surpass, just simply deal with what life throws at them and develop their different coping mechanisms, survival strategies and such. I remember writing short stories around eight, and very, very long books in my teens, but throughout it was always about creating fully fledged characters and losing myself in where their actions took them. Escapism began for me with a very early love of reading, and writing just became the next level for me. I remember there being a particular point, When I watched Interview with the Vampire for the first time,  it was during a very bleak time in my childhood, and it struck me that I wanted to try and create worlds to delve into for myself, and that’s when I began to write on a major scale. The problem I always found in those days, was that I found it so hard to close the books on my characters and end the stories, Mansworld was my first determined effort to write something much more controlled and easy to relax into.
Me: What’s the weirdest thing that ever happened to you – that you can put on a blog?
Bex: As for that, if by my standards based on a very weird life led, I would have deemed it weird … then it’s just not something I’d want to blog about!

Unlike Bex, I’ve led a very sheltered life, so if anything weird ever happens to me, I’ll be all too happy to blog about it.  Anyway, there you have it.  An author who writes a gay thriller for her mum has got to be worth a look! 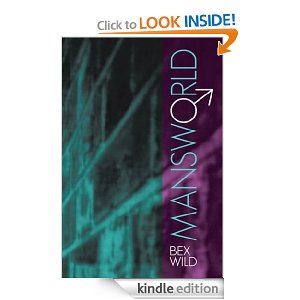